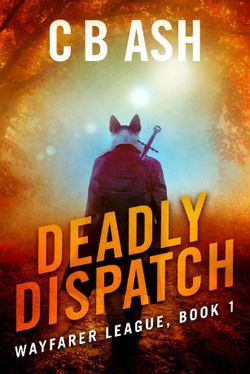 ​The sword landed against his throat. The touch of cold metal compressed Duncan Blake’s entire life into a single desire. Find a way to survive.

Duncan held as still as possible, with his rapier still shoved deep through a dead thief’s chest. His arms ached. The sword had reached his throat just after he had lunged for the thief’s chest. The thief’s death throes almost pulled him off balance. Duncan grabbed the thief by the collar with his left hand. It was a precarious stance with the dead man balanced between Duncan’s outstretched arms. The fact that Duncan’s rapier, a rare weapon called a songblade, vibrated fast enough to cut stone aggravated the problem. Already a faint odor of burning fabric rose from where the blade penetrated the dead man’s shirt.

He glanced down and to his right. The entire blade was not visible but it was held at an angle to his neck. That meant he could see the blood-stained tip just out of the corner of his eye. Right then, even that small part looked as large as a guillotine. He took a slow breath to steady his nerves. Just then the dead body twitched and slid down his sword toward him. Duncan stumbled from the change in weight but managed to tighten his grip in time to hold the corpse still. The last thing Duncan wanted was to stumble and get his throat slit.

His job as a Wayfarer League rider was not that difficult. This particular job started out like any other. Deliver a package of sealed letters. In this case, it was from merchant prince Anatoli Fouchard to Baron Evans Westwood. Duncan’s trip from the Southern Spires kingdom was uneventful. Then he arrived in the Strathwine Barony of the Balelands region.

That was when he saw a gang of five thieves robbing a carriage. Like Duncan, they were obaho, a wolf-kin race that called the Balelands home. Rushing in to defend the carriage had been a spur of the moment decision. And that was when everything went wrong.
© 2016 - C. B. Ash